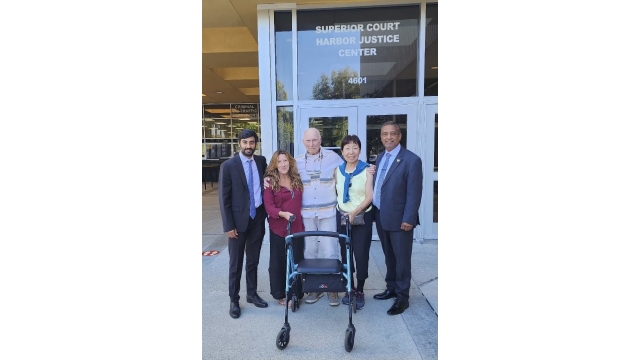 An 85-year-old retired career FBI agent and former Marine officer who was falsely accused by the Orange County District Attorney’s office of a sex crime was unanimously found not guilty on September 19, 2022 in the Harbor Orange County Justice Center by a 12 member jury after a mere 15-minutes of deliberation. This verdict was inspired by the victim’s defense attorney, Imran Syed of Wallin and Klarich. Mr. Syed’s excellent trial skills and relentless pursuit of justice enabled the jury to quickly see that the prosecutor had put on trial an innocent man.

It was also clear in this case that the Orange County Sheriff failed to perform a proper investigation leading to the humiliation of Mr. Havens and his family. The family has retained Glenn Stern Law as civil counsel to seek the appropriate justice for them.

On Monday, September 19, 2022, a jury found Richard Havens not guilty of the charge of indecent exposure. Mr. Havens is 85-years-old with no criminal record whose life was forever changed when police officers stopped him doing his daily exercises in a park close to his home in Laguna Niguel in Orange County, California. At all times Mr. Havens complied with the police and was subjugated to humiliating police detention. While there was overwhelming evidence that he did not fit the description of the accused, he was nonetheless prosecuted for a sex crime that could have led to him being incarcerated and requiring him to register as a sex offender in California.

The evidence developed by Mr. Syed and Wallin and Klarich clearly established that the police had failed to interview numerous potential suspects that matched the description of the actual perpetrator. Mr. Havens, his wife and family were forced to live through the trauma of a criminal court prosecution and trial and the mental and physical anguish that comes along with such an ordeal. The Orange County District Attorney’s office refused to dismiss the charges which led Mr. Havens to retain the criminal defense law firm of Wallin and Klarich, A Law Corporation to aggressively defend him.

Wallin and Klarich was able to show through clear video evidence that numerous other persons who were in the same park at the time of the alleged offense were never approached or interviewed by the police. Mr. Havens did not match the witnesses’ description of the perpetrator. Mr. Havens told the police that he had lived close to the park for many years and he would visit the park on a regular basis to perform specific exercises which were directed by his physician. He also told sheriff’s deputies that prior to his retirement he was an FBI agent for more than two decades.

What happened to Mr. Havens and his family should never have happened. If this could happen to an 85 year old man while using his “walker” it could happen to anyone. Mr. Haven’s detention, arrest and wrongful prosecution were the result of the reckless misconduct and deliberate indifference of the Orange County District Attorney’s Office by failing to competently do their job.

Mr. Havens is happy to have his good name cleared of all wrongdoing by a unanimous jury of his peers. This proves that the criminal justice system works in the hands of a highly qualified criminal defense law firm. However, this does not excuse the conduct of the Orange County Sheriff and the Orange County District Attorney’s office in this matter.

It is important to note that by making this false arrest and then wasting county resources by prosecuting the wrong person, the community at large may still be at risk because the person responsible for this sex crime was never sought by the police and likely remains on the loose somewhere in Orange County, California.