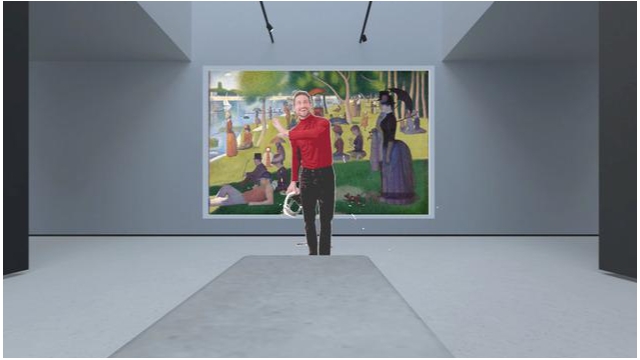 Since a ‘Game changing Innovation’ as reported by Playbill.com, actor and creator Brendan Bradley has helped dozens of artists and institutions create and monetize work in web-based VR spaces. Now, he’s offering a course intended to help other creatives take advantage of the emerging VR performance space as Bradley has done by creating their own live events in the Metaverse.

During the challenge, artists will access OnBoardXR tools and techniques to develop their work in virtual spaces and hosting live events and performances using this digital sandbox.

As part of joining OnBoardXR, participants receive a customizable virtual venue that can be staged to host meetups and events within minutes.

Bradley developed this web-based 3D events company during the height of the pandemic to give stage performers the opportunity to host a live audience from home. During a talk at the augmented world expo this summer, Brendan Bradley showcased the last year of presenting almost 50 live shows, entirely within attendees’ web browser.

Bradley has continued to produce and star in live immersive theater at the intersection of emerging technology and traditional stage, sharing glimpses of recent performances at The Venice Film Festival and SXSW on his social media and premiering his latest film and his album release party in the Metaverse. Through the 21-Day Challenge program, he wishes to impart what he has learned about this new hybrid art form onto a new generation of artists.

OnBoardXR was most recently used in partnership with several artists to build new experiences for Active Replica’s Constellation Program, a Canadian events company offering an Opportunity Fair for live virtual events. Seven original showcases for theater, dance, music and film were featured throughout the month of August, some by early participants in the 21-Day Challenge, which is now open to more artists than ever.

Bradley is a performer and creative futurist working continually at the forefront of hybrid digital art forms. He has worked in many mediums including film, television, motion capture, 360-degree streaming, virtual and augmented reality, and asynchronous performance in order to bring about the next era of stage production. He runs OnBoardXR as a community to support and inspire new artists in immersive web based extended (xR) and virtual reality (VR).

To find out more, visit https://www.brendanabradley.com/futurestages

How to Increase Comfort with Home Window Tinting in Plantation, Fla.